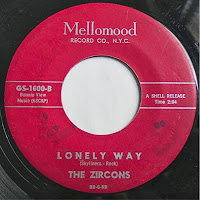 Record collector Sal Donnarumma discovered the group singing on the street and send this to Billy Shibilski of  the label Mellomood Records (label name by Billy’s favourite group,the Mello-Moods).

Billy hear the Gerenetski’s Lead voice similar to Jimmy Baumont lead voice of The Skyliners and the group recorded acappella the Skyliner’s side_Lonely Way. with a version of The Hertbeats tune_Your Way. on the B Side, this with music.

The single was released in November,1963 and their A Side(one of the first new acappella tunes ) played so good in the tri-state radio area until early 1964 but unafortunely the group never reorded again.

This Zircons group not have any relation with the group that recorded for Old Timer Records(see in this blog).
Posted by Whitedoowopcollector at 12:00 AM