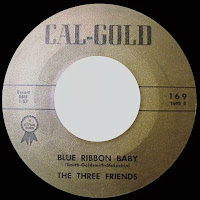 In this post I present a black group with a white doo wop sound,The Three Friends from Los Angeles consisted of Lead and songwriter Clay Hammond (who recorded in 1956 with The Celebritys on Caroline Records) his brother Walter Hammond (of The Olympics) who singing Baritone and their friend Julius Brown as Tenor.

In 1961 recorded for Cal Gold Records the sides_Blue Ribbon Baby/Walkin Shoes. BY THE SOUND OF THE A SIDE, the group has been mistakenly by many people as white or were associated with the early white group of the same name.

They moved to Imperial Records where recorded_Dedicated To The Songs I Love You/Happy As A Man Can Be. The A Side was very popular locally, reached #34 on KFWB’s radio for June 15, 1961, #74 on Cash Box’s hot 100 nationally in July and this same month #89 on the Billboard charts and finally which enclosed  on the “Oldies But Goodies” nostalgia of the mid 60’s.

In late 1961 recorded on Imperial the sides_Go On To School. with a remake of the Tramp’s song_You’re A Square. After this recording they disbanded.
Posted by Whitedoowopcollector at 12:00 AM