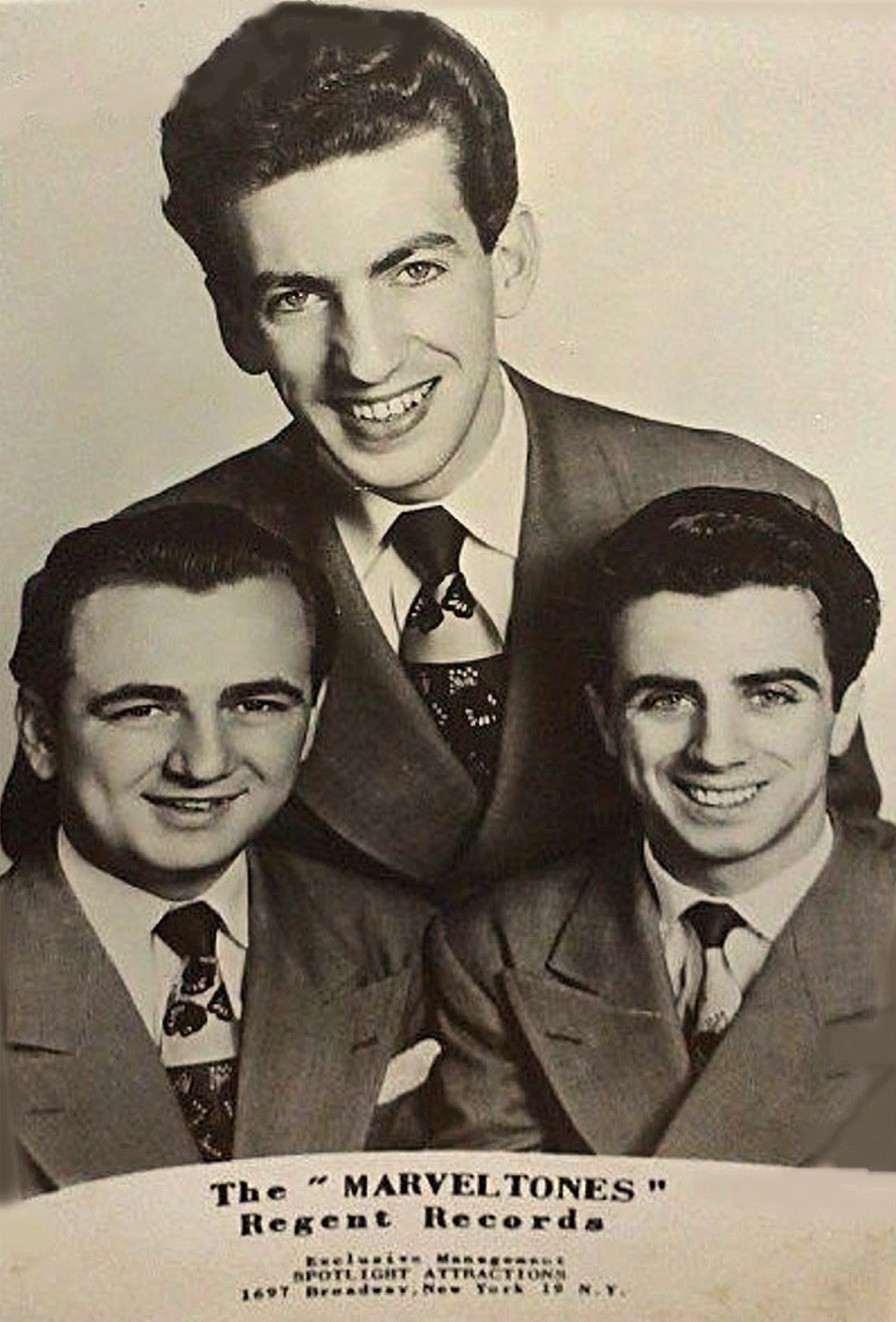 Frank Kreisel, Pete Milano and Jackie Vincent from New Jersey present in all the doo wop guides with..

To Listen or Download_My Heart Is Yours, please visit; https://app.box.com/s/q6ew17ypve50avfn7uw1

Frank and Jackie later recorded with The Gallahads (see in this blog).


Read a bio about Frank Kreisel with The Marveltones & The Gallahads.

Frank Kreisel from the 454 school street in Woodbrige, NJ. attending St. James' Parochial School,' Frank entered an Amateur Night Contest at the Strand Theater-in Perth Amboy and won first prize. The following week, Jackie Vincent copped first place with a combination singing and dancing act. Frank remembers his profes- sional debut at the Alamo in Fords where he broke in with his uncles, Pete, Lou and Johnny Milano. "We had a hot quintet, but as a fresh- man at Woodbridge High, I found it difficult to keep up with my studies due to the late hours we played. However, the experience made the arduous job worth- while."

In 1940 Frank broke away from the quintet to organize a sixteen- piece band, which played at the Laurence Harbor Casino and vari- ous spots along the East coast. The group was starting to jell when World War II broke out, forcing the band to cancel their engage. With the call for musicians rap- idly diminishing, Frank enlisted in the Army where he compiled an interesting record in the. Pa- cific Theater of operations as a combat infantry man with the 132nd Division.

He -was awarded four battle stars after engagements on Guadalcanal and Bougainville and the Philippine Islands. Dur- ing the invasion of Sabu, he was promoted to the rank of sergeant. After serving his apprenticeship under fire, he was plucked from the ranks to take over the 132nd Division's band which later enter- tained troops throughout the Pa- cific. Frank recalls the pleasant experience of going on tour with Bob Hope and Jack Benny. "Those two were great and I learned a lot through my association with them. Hope, in particular1, was coopera- tive and often gave me encour- agement."

Frank shed his Army uniform in 1948 and immediately re-or- ganized his band with the inten- tion of picking up where he left off before his service stint. His plans were shattered, however, when the bottom dropped- out of the big band business and vaude- ville. It was a crushing blow, but his determination to remain in show business never wavered and he went on to organize a trio with Pete Milano and Jackie Vincent.

The group had a small measure of success playing the usual hotel circuits in Florida but wasn't mak- ing any substantial progress. After a series of night club dates, Pete eft the trio, which led to the re- organization of the combine.

With the acquisition of guitarist George Cippellone in 1949, the trio went on the Arthur Godfrey Talent I cout Show and got its initial break by winning first prize. Thejr talents were immediately recog- nized by Arthur Godfrey, who signed them for a spot on his radio and TV shows. Next came a contract with Re- ent Records from whom the group recorded "My Heart Is Yours," which was written by Frank him- self.

The arrangement sold*47,000 :opies, but as Frank puts it, "The best I could do with the royalty check was buy a new hat, believe i t or not." Their association with" Regent brought about the name "Marveltones" for the trio.

Frank thought the Marveltones were on their way to the top "when, they won $1,000. on Dennis James' television program "Chance of a Lifetime"; but only the usual night lub and hotel dates followed. He realized something was missing but he couldn't put his firmer on it, so he decided to re-organize once more.

Last January he persuaded Len Carrie to abandon his quintet, the Cracker Jacks, and join forces with Jackie Vincent and him.Car- rie brought along his drummer Buddy. Raymond to round out the quartet. After the first series of rehearsals, Frank stated, "The sound was there and I knew we had the combination to go all the way this time. I broke the news to our agent Johnny Brown and it was he who thought of: our present name, the Gallahads.

Frank went on to explain: "We were aware of our capabilities, so we decided to risk everything on a demonstration record. We engaged Danny Mendelson, one of the best arrangers in the business to han- dle "Careless" and the song I wrote "Ooh-Ah." Danny felt the same as I about the quartet so he hired the top musicians in the field for our recording date. Among the group were such noted instru- mentalists as Ernie Royle, Jim irawford, Ernie Banks, Sandy Block and Eddie O'Connor, Meh- delson was terrific in the way he strove for perfection—his untimely death two weeks ago was a severe blow to all of us.

Once the arrangement was com- pleted, the Gallahads had five rec- ord companies waving contracts in their direction—they felt it would be a hit. After some delibera- tion, they signed with Capitol Rec- ords because their proposition was the-best and they are regarded as one of the big four to the industry.

When the record was released March 2nd, "Ooh-Ah" was sup- posed to be the A side, but most of the disc jockeys and juke box op- erators seemed to favor the old standby "Careless." Frank claims he doesn't mind which side they prefer, just as long as they con- tinue playing the record. Early.re- ports in the metropolitan area in- dicate the platter- is climbing among the top sellers.

With "Careless"'making a steady climb in record sales and popu- larity, the Gallahads have become the most sought-after quarter this side of the Mississippi. Their per- formance under the spotlights is a show-stopper with comedy blended skillfully with their vo- calizing and playing. Charlie Ven- tura, an outstanding musician and veterari entertainer, after witness- ing the group stated, "The kids are loaded with talent and I can't see how they can miss going all the way-to the'top—it's inevitable."

In an effort to capitalize on their recent success, the quartet leaves tomorrow on an extended tour which opens in Montreal, Canada, and terminates in the midwest. Upon their return East, they hope to harness a TV show and make some additional recordings for Capitol Records.
Posted by Whitedoowopcollector at 11:34 AM