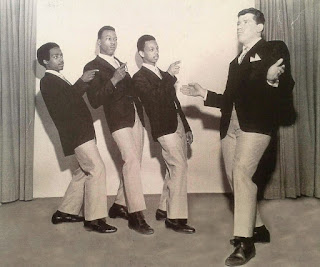 Interracial group from Philadelphia formed in 1956-57 by schoolmates at the Vaux Junior High and the Ben Franklyn High School; James "Little Jimmy" Wilson (Lead and white member), Richard Anderson (Baritone / 2º Tenor), Joe Scott (2º Tenor) and Oliver "Ollie" Spence (1st Tenor / 2º Lead). they have a guy as Bassman but leave soon by problems with the justice.

They practice with the classic doo wop songs as_Little Darlin / In The Still Of The Night / Teardrops... and soon won a local talent contest who send the group to participe in many local shows in clubs at Ridge and Columbia avenues shortly after they hire Joe Cook (of "Peanuts" fame) as their manager. 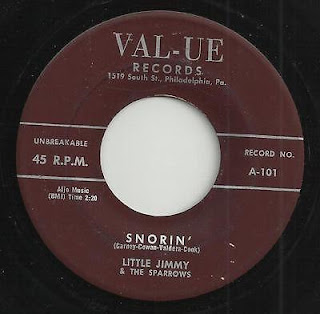 In the Autumn of 1958 the group recorded two songs_Snorin' / Two Hearts Together. released in the Philadelphia based label VAL-UE records, the sides play in local radio shows by Dj's as Jocko, Jimmy Bishop or Kae Williams but without promotion the record dead soon.

Even so the A side was reviewed by Billboard in november of 1958 with three stars (very good).

The group fired its manager and work with song writter/recording artista, Kenny Gamble and later with Berry Gordy (Motown) but never recorded again and disbanded in late 1963.