THE AMBERS meet THE JAGUARS

In March,1958 two interracial groups from California The Ambers and The Jaguars recorded together for the Ebb label owened by Leonora Rupe( whose ex-husband Art owned Specialty). 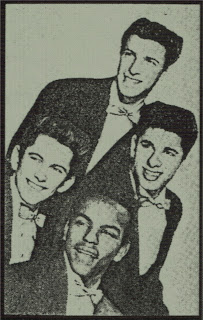 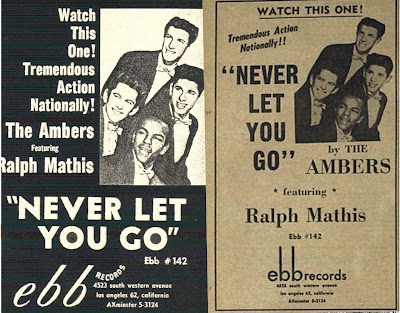 According to The Complete Book Of Doo-Wop they recorded for Ebb,Greezie and Todd Records. 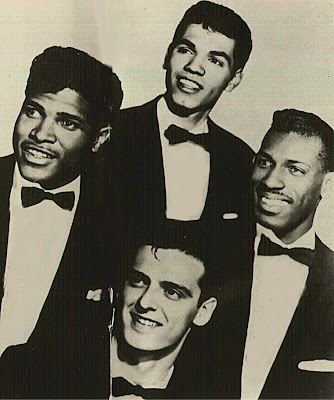 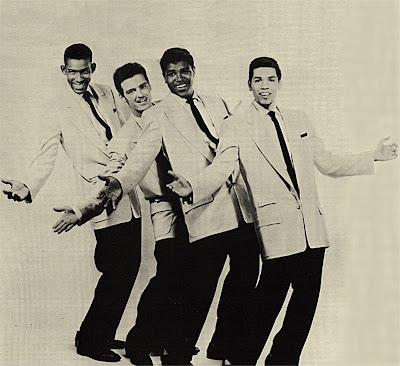 Above; left to right Charles,Val.Sonny and Manny(1956).

The Jaguars were one of the first interracial vocal groups(Black,White and Hispnanic members).they started in 1954 from the chorus on The Freemont High School in Los Angeles by four guys around the country; Herman" Sonny" Chaney(Lead from Dallas, Texas) ,Valerio "Val" Poulito(Tenor from Detroit), Manuel "Manny" Chavez (Baritone from Los Angeles) and Charles Middleton(Bass from Lafayelle,Louisiana). 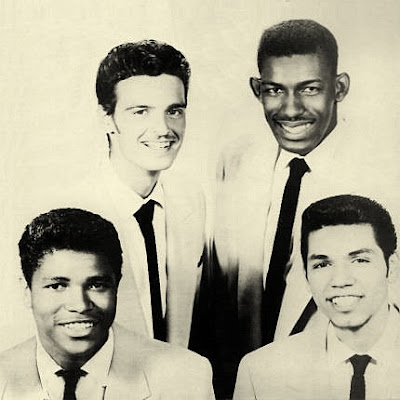 Above; back row Val and Charles,front row Sonny and Manny(1956).

The group first called The Shadows and after The Miracles.in 1955 they recorded two obscure sides for Cash Records_A Gal Named Jo/You're An Angel. and signed with Aardell Records owened by big-band trumpeter Bob Ross and backed to his daughter Patty Ross on the side_Rocket Davey Rocket. This side was re-recorded by the group in June of 1955 and with the ballad_I Wanted You. was the first release of the group on the label.but by recomendation of the comedian Stan Freberg the group changed their name to The Jaguars.the recording have a good local acceptacion and the guys appeared on The Hunter Hancock's Rhythm Bluesville Show but without promotion from the label the record dead soon. 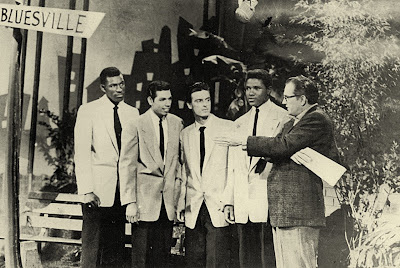 In late 1955 they recorded the sides_You Don't Believe Me/Be Me Sweetie. without any success.In mid 1956 Ross change the label name to R-Dell Records and the group recorded the 1936 Fred Astaire Hit_The Way You Look Tonight. with the B Side_Moonlight And You. the A Side was a moderate local hit and the bigggest seller of the label,this re-released the side in late 1956 with the flipside_Baby Baby Baby.(others re-releases were in 1962 on Baronet and in 1965 on Original Sound Records).

After of another release on R-Dell_The City Zoo/I Love You Baby. the group moved to Ebb Records where back up to Ralph Mathis(see above post) and cut an own single in 1958_Hold Me Tight/Picadilly. without any success in 1959 the group moved to Art Laboe's Original Sound label where recorded the single_Look Into My Eyes/Thinking Of You. in this session Manny was out and Tony Allen and Richard Berry singing in the session.With one mayor distribuccion by the label the B Side have a nacional acceptacion and the group have many live perfomances(the label re-release the disc in 1962.) 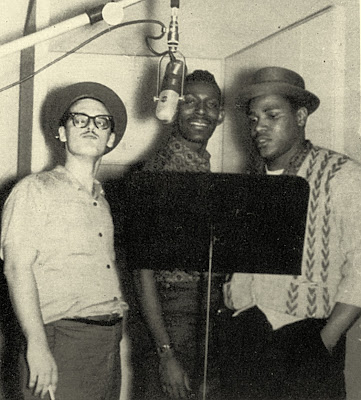 In April of 1959 Manuel Chavez and Sonny Chaney recorded as Frankie & Johnny for Sabrina Records_My First Love/Do You Love Me. and in 1960 as Chavez & Chaney on Spry Records_Be My Love/Picadilly. (later re-released in 1964 on Blast Off Records as by Frankie & Johnny)(see in this blog).
In late 1960 Sonny and Val recorded for T-Bird Records as The T-Birds(see in this blog)_Green Stamps/Come Dance With Me.(later re-released in early 1961 on Chess Records). and R-Dell Records released two unreleased sides of the group_Don't Go Home/Girl Of My Dreams. 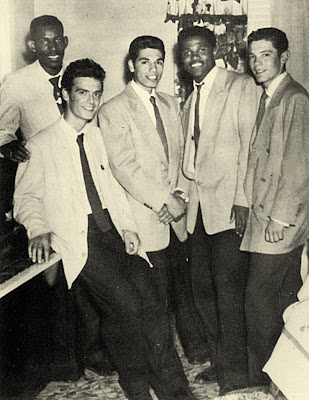 In 1961_The Way You Look Tonight. is enclosed on the Art Laboe's first Oldies But Goodies LP and The Jaguar's name have a national recognition.On August of 1961 the group recorded their last single_Fine Fine Fine/It Finally Happened. on Randezvouz Records (re-released in 1963) and finally broke up. Val recording with The Nuggets on RCA and with The Beach Boys on their single_Surfin Safari. Manny recorded with The Sevilles of_Charlena. fame.

In late 80's the group reunited again and recorded for Classic Artist Records. 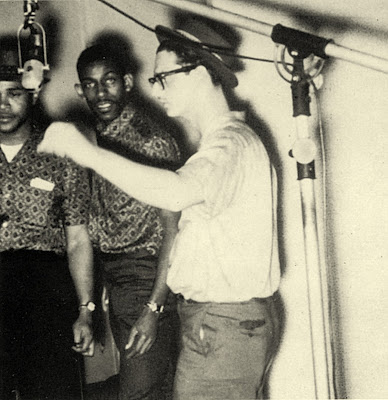 Bio anf Pictures from The Jaguars Lp "The way You Look Tonight" but you can find more information at; http://www.uncamarvy.com/Jaguars/jaguars.html
Posted by Whitedoowopcollector at 12:00 AM