THE LANCERS aka THE ROYAL LANCERS 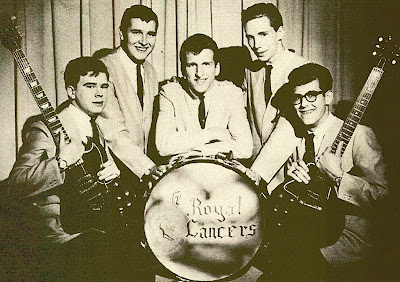 They singing in school dances, private party and local clubs, in late 1962 signed Harold Kern as their manager who send the guys to Philadlphia's reco-art studio were they recorded_Oh Little Girl / You're The Right One.

The master was presented to Tony Mammorelle of Swan Records who releasd the sides in 1963 on the subsidiary label Lawn under the group name of The Lancers.


The A side was very popular in California, Cincinnati and Germany! and the label re-released the recording as by The Royal lancers

Also the label released_Hey Little One / Hey Everybody (A side original by Dorsey Burnette) with the new name of The Royal Lancers.

In 1964 their manager started his own label Hi-Mar records and the group recorded the James Brown's_Good Good Lovin. with the Troy Shondell's tune_This Time. 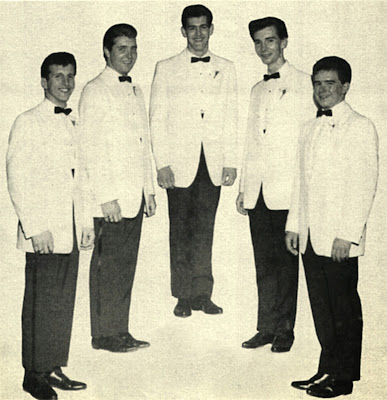 The disc was a disaster and group and manager change the sound to a Four Season's sound-a-like and recorded_in 1965 for Hi-Mar_Be My Girl / Hey Lttle Girl.

The recording have  big sales and the group recorded two new sides_Head Of The Crowd / Baby I Love You. in this recording session Bruce was replaced y Bobby Morrison.

For a nule promotion and with the Motown and british invasion the disc dead soon and the group never recorded again and finally disbanded in late 1965. 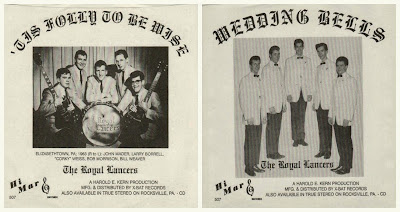 In 1963 The Lancers back up ONLY INSTRUMENTAL  to The Missles on their Lawn sides_Little Mary / The Singing Flute.

Also in 1963 The Lancers back up ONLY INSTRUMENTAL to George Wilson & Th Chel-Mars on their Hi-Mar sides_Roamin' / Feel Alright.

And in 1964 The Lancers back up ONLY INSTRUMENTAL  to Jimmy Rock Hi-Mar sides_Mama / Summer Love .

In 2002 were released two unreleased sides_Wedding Bells / This Folly To Be Wise. as a 45 rpm with a picture sleeve.

Posted by Whitedoowopcollector at 1:51 PM

I went to High School with these guys, they were just a few years older than me. We all waited breathlessly, when Dick Clark announced he was going to play it on Bandstand. As an update, the lead singer 'Corky' Weiss, was killed in an automobile crash while returning home from med school in Philadelphia. The lead guitarist, John Mader, committed suicide after returning home from the Vietnam war. Both Corky and Jim had younger brothers who played in a band with me; I knew them all rather well.﻿

This is my father's band. I'm delighted to report that Corky Weiss is alive and well, and living in Central Pennsylvania. I regret that the information about John is accurate. The group played two times since their break-up; once at The Lancaster host roughly 35 years after their split, and a second time at The Chameleon Club in Lancaster PA, roughly 40 years after their split.

There is a compilation disc of many of the great bands from the early 60's Central Pa era, available, that includes 10 tracks by The Lancers or The Royal Lancers